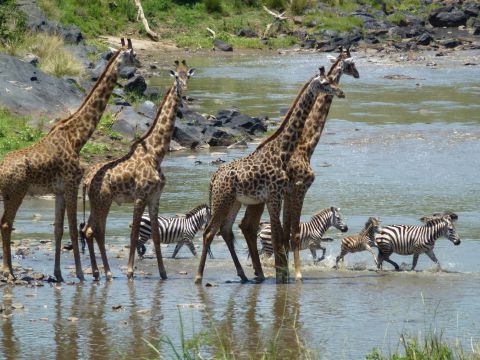 From our vantage point on the south bank of the river in the relative safety of our ancient but reliable Land Cruiser we could see the drama unfolding. On our last full day of safari, this would likely be our final chance to witness the spectacle of a zebra crossing, and with John and Sam, our intrepid guide and driver, we were once again witnessing a familiar scene that we had seen play out on our three prior attempts that day.  A large zeal of plains zebras would amass on the north bank, seeking a safe passage across the river on their annual migration south to the Serengeti.  The alpha male would move down to the edge of the water, but Nile crocodiles, anticipating the zebras, would have already moved into position, seeking prey, thwarting the zebras.  In this location, only one croc was present, giving the zebras their best chance, but the alpha was wary of the situation and would not commit the dazzle to the crossing.  Equatorial light was beginning to fade as we reluctantly resigned ourselves to being content with watching the fascinating predator prey interaction without actually seeing the zebra crossing; but then a journey of giraffes appeared and formed a tower in the river, perilously close to the lurking crocodile.

Throughout our two-week, five camp safari tour of Kenya, our guides and drivers had been consistently competent in all ways.  If we showed interest, enthusiasm and curiosity for the flora and fauna that extended beyond quick sightings and photo ops of the fabled Big Five, our guides responded accordingly and made every effort to share with us their deep, intimate, and indigenous knowledge of natural history.  Subsequently, we made every effort to distinguish between plains and Grevy’s zebras, black and white rhinos, spotted and striped jackals, and the full bewildering spectrum of antelopes, ranging from ponderous eland to elegant gerenuks and dainty dik-diks.  On our walking safari, we had close encounters with both baboons and baboon spiders. We are keen birders, and our guides made extra efforts to locate and identify over 200 species, including the quirky Kori bustard, the spectacular lilac breasted rollers in flight, and the elusive riparian fin foot.  In Ol Pejeta, we sallied forth for a night safari and were rewarded with two sightings of aardvarks.

Above and beyond our life-list bird and megafauna sightings, our most spectacular experiences came from seeing interspecies interactions.  One early morning we passed an hour observing a female lion digesting her first feeding on a freshly killed zebra. A pair of jackals, in pursuit of their own morning meal, moved in.  We watched raptly as the two jackals, working in tandem, would take turns moving around the lioness, slink in to her zone of proximity to distract and pull her away far enough away from the carcass so that the other jackal could dart in and snatch a few tasty morsels. In another encounter, we chanced on three cheetahs, a mother and her yearling cubs, resting in the shade.  A solitary spotted hyena, perhaps attracted by the scent of a recent kill, happened by.  The mother could have easily chased off the intruder but instead looked on in attentive disdain and allowed her offspring to handle the situation.  We showed the capacity to sustain our focus on these interactions, and we were rewarded with lifetime encounters.

Now, on our penultimate game drive, we all watched incredulously as a tower of giraffes,  apparently indifferent to the presence of the infamous enormous crocodile, assembled in the stream right at the crossing.  Widely believed to be mute, giraffes do have an amazing capacity to communicate with each other, and apparently, with other species as well.  Their presence and body language assured the alpha zebra that they would stand as crossing guards, and the zeal of zebras, with their tower of giraffes offering a measure of protection, thundered across the river to the safe sanctuary of the south bank.  At one point, one giraffe moved further up the north bank to signal to the remaining half of the dazzle to cross.  Jan peered through her long lens and followed her bliss.  I secretly hope the croc would make a kill.  John and Sam, with two lifetimes in the Masai Mara, had never witnessed giraffes intervening in the predator prey dance of zebra and crocodile.  The final zebra splashed up the south bank joining the safety of the others as they reassembled and resumed their southern migration with their customary zeal. The tower of giraffes morphed into a journey of giraffes, and they moved onward into the fading African light.  Sam fired up the Land Cruiser, and we headed back to camp for our final sundowner in Kenya.