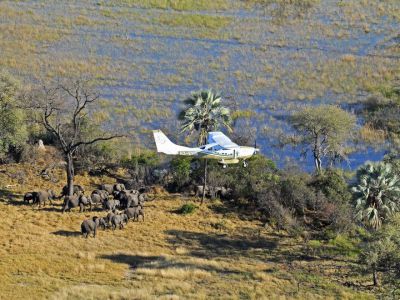 Elephants without Borders is a collaborative, multi-faceted research project that aims at conducting the largest Pan-Africa aerial survey of the elephant population. It is being developed as a response to the high rates of poaching and population declines in elephants. Ivory trade and poaching pose serious threats to African elephants, and experts predict there is a risk that they could disappear from many parts of the continent for good. The two-year census project, which kicked off in February 2014, will provide accurate data about the numbers and distribution of the African elephant population, including geographic range, forming an essential baseline that will benefit conservation efforts. The survey comprises 18 planes, 46 scientists and about 19,000 transects, totaling 600,000 km, which will be flown in 18,000 hours over 7 months of flyovers.